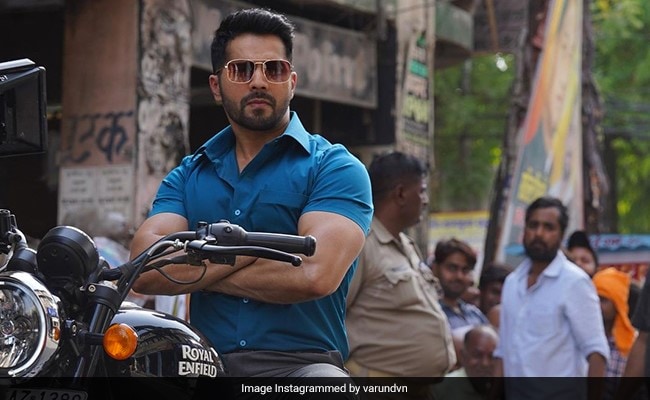 Nothing can deter Varun Dhawan, not even leaked pictures from the sets of his next film. Hours after stills from his upcoming film Bawaal went viral on social media, the leading man appears to have taken matters into his own hand and posted a few stills from the sets. In the pictures shared, Varun Dhawan is seen posing on a Royal Enfield, dressed in a crisp blue shirt, khaki pants and sunglasses. Might we also add that Varun Dhawan looks like he means serious business in the stills that have got fans excited. Sharing the post, Varun Dhawan referred to the photos that went viral on Monday and said, “Kya Bawaal karte ho. Hamari photo leak kardi. Love you, Kanpur. Chalo hum bhi daal dete hain [What a ruckus this is. My photo has been leaked. Love you Kanpur. Fine, let me post some too].”

Replying to the post, Jackky Bhagnani said, “Love it, brother.” Maniesh Paul, who will be seen in Jug Jugg Jeeyo with Varun Dhawan, wrote, “Yeh ladka aag hai…Bawaal machega re baba [This boy is fire… He will create a commotion].”

Bawaal is directed by Nitesh Tiwari, who has previously helmed films such as Dangal and Chhichhore. The film is being produced by Sajid Nadiadwala. The director and producer have previously worked together in Chhichhore.

Bawaal features Varun Dhawan opposite Janhvi Kapoor, making it the first time they will be seen opposite each other. Janhvi Kapoor announced her association with the project on Instagram last month. She wrote, “Joining hands with two of the finest, Sajid Nadiadwala and Nitesh Tiwari. I am so grateful and happy to announce my next, Bawaal starring opposite Varun Dhawan. See you in cinemas on April 7, 2023.”

In addition to Bawaal, Varun Dhawan will be seen in comedy-drama Jug Jugg Jeeyo, co-starring Kiara Advani, Anil Kapoor and Neetu Kapoor, as well as horror-comedy Bhediya with Kriti Sanon.

Janhvi Kapoor, meanwhile, will next featuer in Good Luck Jerry, which is a remake of the Tamil movie Kolamaavu Kokila. She will also be seen in another remake – Mili, an adaptation of the Malayalam survival drama Helen.