Swimmer Anita Alvarez fainted in pool, rescued from bottom: What could have caused it?

US swimmer Anita Alvarez, who was competing at the World Aquatics Championships in Budapest earlier this week, fainted after her routine and sank to the bottom of the pool from where she had to be rescued during her solo free final.

The 25-year old was found to be unresponsive and not breathing, and it led to a massive scare at the stadium.

Her coach Andrea Fuentes — a four-time Olympic medallist — carried the unconscious Alvarez to the surface, before receiving help to get her out of the pool. The swimmer was then put on a stretcher and taken to the pool’s medical centre.

Rapid rescue.@AFP photographers Oli Scarff and Peter Kohalmi capture the dramatic rescue of USA’s Anita Alvarez from the bottom of the pool when she fainted during the women’s solo free artistic swimming finals at the Budapest 2022 World Aquatics Championships pic.twitter.com/8Y0wo6lSUn

The US swim team released a statement saying that Alvarez was “resting and feeling better”.

Fuentes, too, took to Instagram to write: “Anita’s solo was so good, it was her best performance ever, she just pushed through her limits and she found them. But [she] is okay and the doctors also said she is fine. We all know it happens in other sports: cycling, marathon, track and field… some don’t make it to the final line and some even finish crawling or passing out.

“Our sport is very hard too. Now it’s time to rest and recover.”

While there could have been many reasons why she fainted, exhaustion and lack of oxygen cannot be ruled out. Swimmers spend a lot of time practising in the pool, learning how to sustain underwater and continuing their act.

According to Dr Jyoti Bala Sharma, director, neurology at Fortis Hospital, Noida, the common causes of unconsciousness are:

– Syncope or the loss of consciousness due to lack of blood flow to the brain
– Neurologic cause like seizure, stroke or TIA
– Low blood sugar
– Low blood pressure
– Dehydration
– Problem with heart rhythm
– Straining
– Hyperventilation 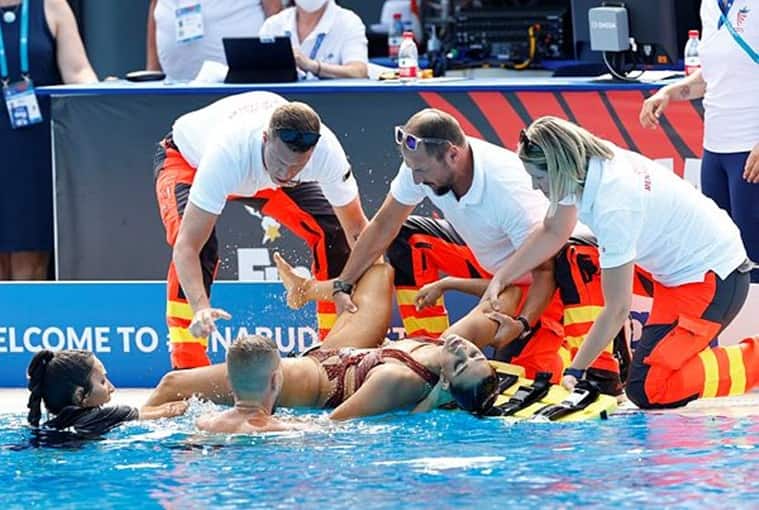 “Vasovagal syncope (sudden drop in heart rate and blood pressure leading to fainting) is a disorder of autonomic cardiovascular regulation, and fear and pain are its most common triggers,” she tells indianexpress.com.

Dr Sharma adds that exercise and lack of oxygen may also be triggers for vasovagal syncope, but it is usually “post exertional” and “seen with upright posture”. “Vasovagal syncope that occurs during exertion and in a non-upright position is unusual,” she says.

“Syncope in athletes is not uncommon. In one research study of 7,568 athletes undergoing pre-participation physical examination, 6.2 per cent reported a syncopal spell in the last 5 years. Syncope was unrelated to exercise in 86.7 per cent, post-exertional in 12 per cent, and exertional in 1.3 per cent,” she concludes.

According to the latest update on Alvarez, she will “not have the opportunity to compete in her final event of the competition, but she will return to the pool in the near future”.