The official website for the new original video anime (OVA) of the Stand My Heroes smartphone game opened on Monday, and the site announces the new anime’s main staff, Stand My Heroes: Warmth of Memories title, and 2023 release.

Hitomi Ezoe (episode director on JoJo’s Bizarre Adventure, Hozuki’s Coolheadedness) is directing the anime at M.S.C, the studio behind the 2019 Stand My Heroes: Piece of Truth television anime. Sayaka Harada (STARMYU, Code:Realize -Guardian of Rebirth-) is also returning from the 2019 television series to oversee the series scripts with Hajime Aida again credited as scenario adviser. Yukie Takayama (episode animation director on STARMYU, Code:Realize -Guardian of Rebirth-) and the band fox capture plan (Rascal Does Not Dream of Bunny Girl Senpai, Salaryman’s Club) are back from the television anime to design the characters and compose the music, respectively. 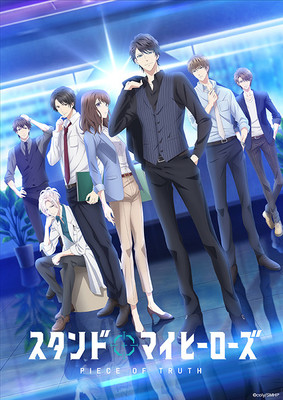 The otome puzzle game for female players is set in modern Tokyo at Matori, the narcotics control unit of investigators under the Ministry of Health, Labour and Welfare. The protagonist, who has the unique trait of drugs having no effect on her, ends up working in the unit. She recruits personnel from investigators, idols, writers, genius high school students, top designers, butlers, underground doctors, and others to form teams of modern ikemen heroes for different missions.

The OVA adapts the additional Narumi Seo character event map story that launched in the original game in April 2018. As such, it features the heroes of the Seo Research Lab who did not appear in the previous television anime.

Hideyo Yamamoto (Strike the Blood, The Prince of Tennis II OVA vs. Genius 10, Code:Realize -Guardian of Rebirth-) directed the television anime at M.S.C.

The game launched in 2016 and has garnered more than 1 million downloads.