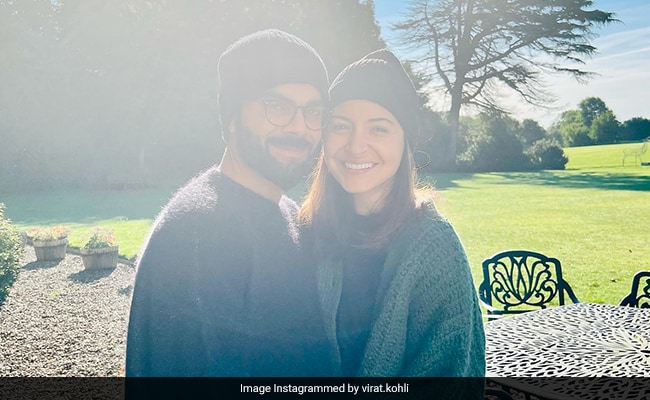 Pictures from Anushka Sharma and Virat Kohli’s holiday in England keep getting better and better. The reason we brought this up today is because on Tuesday, Virat Kohli shared this picture-perfect moment and he wrote: “Beautiful mornings.” In the picture, the star couple can be seen flashing ear-to-ear grins as they pose at a picturesque location. What’s not to love? Anushka Sharma began the week by sharing some pictures from her date with husband Virat Kohli. She simply added heart emojis. No caption needed.

This is what Virat Kohli posted:

This is what Anushka Sharma posted on Monday.

Over the weekend, sharing this picture of herself from the park, Anushka Sharma captioned it: “I had a great day at the play park that we took our daughter to.”

Other than the holiday, Anushka Sharma is in England for the shoot of her next project Chakda Xpress, in which she will be seen playing the role of Jhulan Goswami. This morning, the actress shared a picture of herself from the film’s set and she wrote: “Getting into her shoes and recreating the journe #ChakdaXpressOnNetflix #ComingSoon.”

She previously teased her Instafam from the sets of the film and she wrote: “A moment from a story that needs to be told.”

Anushka Sharma married cricketer Virat Kohli in 2017 in an intimate ceremony in Italy after dating for many years. They welcomed daughter Vamika in January last year.

The actress, who was last seen in the 2018 film Zero, co-starring Shah Rukh Khan and Katrina Kaif, was busy as a producer in the last few years. Anushka Sharma is the star of films like Rab Ne Bana Di Jodi, PK, Band Baaja Baaraat, Sultan and Ae Dil Hai Mushki, to name a few. Anushka Sharma will next be seen in Chakda Xpress, her first project after the birth of daughter Vamika, who she welcomed in 2021. The film is based on the life of Jhulan Goswami.