Lord Of The Rings: Ring Of Power Releases Orc Photos The Orcs in the Lord of the Rings: The Rings of Power TV series on Amazon has its first official glimpse of orcs. Prime Video and photographer Matt Grace created the new Orc images. They capture the severity and monstrosity of these Orcs. The amazing prosthetic and makeup work being done to give their faces and bodies a lot more detail and expression. This might even be better than their counterparts from Peter Jackson’s Lord of the Rings Trilogy of the 2000s. While J.R.R. Tolkien fans have strong opinions about many aspects of this Rings of Power trilogy, everyone should be able to appreciate it. The series has an insane budget that blows others out of the water.

Although there are notable modifications in both their prosthetics and clothing from Peter Jackson’s The Lord of the Rings trilogy, the design isn’t wholly dissimilar. For starters, these orcs are sporting exaggerated armor and helmets that were obviously stolen from men or fallen elven fighters. They also seem to be in far better fighting shape than the horse fodder that faced the Rohirrim at the end of the Third Age.

Lord Of The Rings: Rings of Power happens in the Middle-earth universe. But because it takes place in the Second Age, viewers should expect to witness drastically different locales and populations than they are used to. Many beings won’t even exist in their Third Age versions yet, but a few figures will cross over, notably the Elf Galadriel, who Morfydd Clark will portray as being far more of a warrior than Cate Blanchett’s portrayal in Jackson’s films. The Harfoots, forerunners of the Hobbits who will play a significant role in the series, are one notable example of this so far.

At the beginning of the Second Age, orcs dispersed over Middle-earth and tending to their wounds after the catastrophic War of Wrath, in which Morgoth, the Black Foe of the World, reached a confrontation by the full power of Ainur and the forces of light. 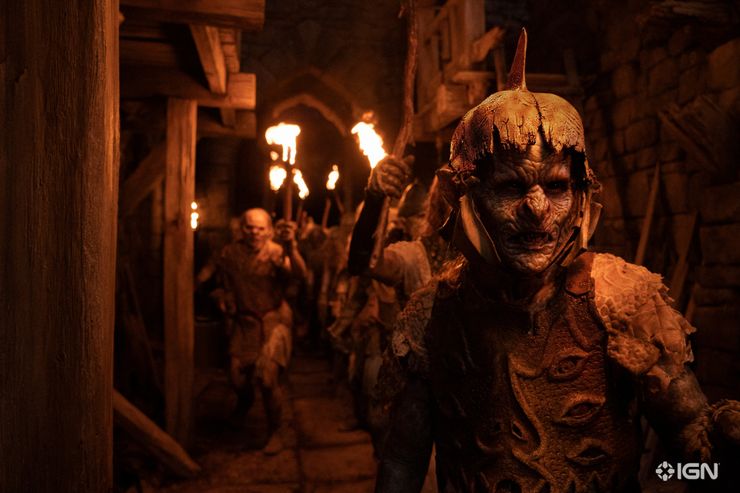 Lord Of The Rings: The Rings Of Power Covers A Wide Storyline

The Rings of Power intends to cover the entirety of the Second Age in five seasons and in a compressed timeline. So, the writers have decided it to make the orcs a little more threatening than their chronological book counterparts. It may be some time before Sauron the Deceiver unites them all under a single banner once more.

IGN has the full coverage of the orc images. Jamie Wilson, who has worked on each live-action Lord of the Rings and Hobbit movie, is in charge of the prosthetics department for The Rings of Power. The series’ creative crew has a profound understanding of (and affection for) Orcs, as executive producer Lindsey Weber explains:

“I love creature design, so I’m very happy to talk about this stuff. JD and Patrick – the showrunners – the very first page of their bible was about Orcs,” Weber explains. “They have a real passion for them, they love practical prosthetics and design, and they felt that they needed exploration given that this is the Second Age and thousands of years before the events of the Third Age. It was really important to them to treat them as their own culture and explore their world on its own two legs in its own right.”

While viewers of The Lord of the Rings films see Orcs assemble into sizable armies, those in season 1 of The Rings of Power have yet to do so. Instead, the first episode of the Prime Video series shows them as dispersed scavengers, though it’s clear that won’t last forever.

What do you think about Lord Of The Rings: The Rings Of Power? What side of the aisle are you on? Do you like how the orcs look?