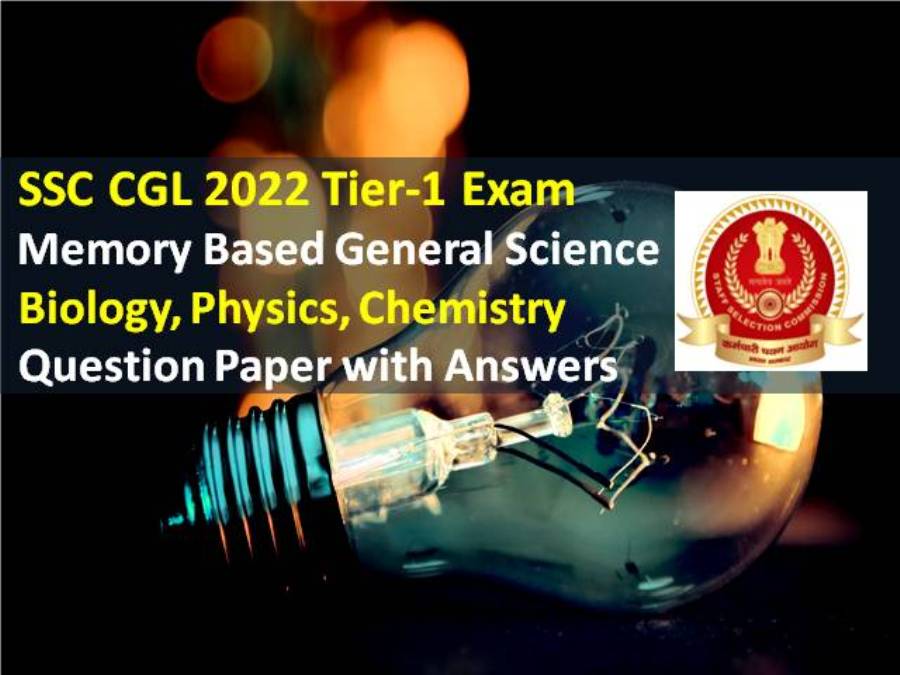 SSC CGL 2022 Exam Memory Based Questions: Staff Selection Commission (SSC) is conducting the SSC CGL 2021-22 Tier-1 Exam from 11th to 21st April 2022. So for the benefit of candidates, we are going to share the important memory based General Science (Biology, Physics, Chemistry) questions with answers as per the feedback received by the candidates who have appeared in SSC CGL Tier-1 2022 Exam. Candidates are advised to definitely cover these questions to score high marks in the Exam.

Let’s have a look at the Important General Science Questions that are being covered in the SSC CGL 2022 Tier-1 Exam:

Joule is the SI unit of?

Answer: Energy – The SI unit for work and energy commonly used in drawing is the joule (J), which is equivalent to a force of one newton exerted through a distance of one meter (m).

What percentage of water is in the ocean?

Answer: About 71 percent of the Earth’s surface is water-covered, and the oceans hold about 96.5 percent of all Earth’s water.

Leprosy is caused by:

Answer: Hansen’s disease (also known as leprosy) is an infection caused by slow-growing bacteria called Mycobacterium leprae. It can affect the nerves, skin, eyes, and lining of the nose (nasal mucosa).

Answer: Friedrich Wöhler was the first to synthesize an organic compound from an inorganic substance.

Answer: Vitamin E was discovered by Evans and Bishop in 1922

Which of the following is a part of the flower?

Which disease is not prevented by vaccination?

World Water Day is observed on which date:

Answer: László Lovász and Avi Wigderson  – The Abel Prize is awarded annually by the King of Norway to one or more outstanding mathematicians

Which element in chilli peppers makes them spicy?

The three laws of planetary motion were discovered by?

Which of the following Vitamins is Water Soluble?

Rickets is caused by deficiency of which vitamin?

Xerophthalmia is caused due to the deficiency of:

What is the valency of halogen group?

Answer: One – Valency lavel of the elements in the halogen group is one.

Halogens belong to group `17 of periodic table and their general electronic configuration is ns2np5. So, they have a tendency to accept one electron to get noble gas configuration.

Which of the following disease is caused by Parasite?

Answer: Examples of parasitic diseases that can be bloodborne include African trypanosomiasis, babesiosis, Chagas disease, leishmaniasis, malaria, and toxoplasmosis.

What is the Common name of Green Algae?

Answer: Chlorophyta or Prasinophyta is a taxon of green algae informally called chlorophytes

Electron Volt is the unit of

Answer: Electron volt, unit of energy commonly used in atomic and nuclear physics, equal to the energy gained by an electron (a charged particle carrying unit electronic charge) when the electrical potential at the electron increases by one volt. The electron volt equals 1.602 × 10−12 erg, or 1.602 × 10−19 joule.

Which of the following is a part of Kidney?

Answer: Each kidney has an outer layer called the cortex, which contains filtering units. The center part of the kidney, the medulla (pronounced: meh-DUH-luh), has fan-shaped structures called pyramids.

Answer: the process in which heat moves through a gas or a liquid as the hotter part rises and the cooler, heavier part sinks.

Answer: The units for momentum would be mass units times velocity units. The standard metric unit of momentum is the kg•m/s.