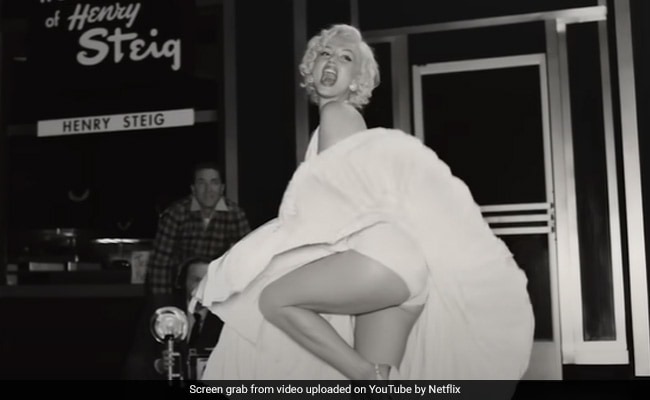 A visceral biopic of Marilyn Monroe finally got its premiere in Venice on Thursday, with critics divided over the traumatic treatment of the icon but praising a “ferocious” lead performance from Cuban star Ana de Armas. There has been heavy anticipation for the long-delayed Blonde, a Netflix production that delves deep into the childhood trauma and abuse that lay behind the sexualised image of the 20th-century icon.

Based on the semi-fictional book by Joyce Carol Oates, the film is a non-stop swirl of artistic flourishes that pulls no punches in depicting maternal violence, rape, and a particularly shocking interaction with President John F Kennedy.

Armas told reporters in Venice that she could feel the presence of Marilyn during the filming, which included shooting in the real homes where Monroe was raised and died.

“I truly believe she was very close to us, that she was with us,” Armas said.

“She was all I thought about, all I dreamed about, all I could talk about, she was with me, and it was beautiful,” she said.

For many critics, though, the unremitting grimness was too much.

The Guardian called it “moving, explicit and intensely irritating”, and was among several to argue that the film only added to the icon’s exploitation.

Others, however, were impressed by its chutzpah.

Brad Pitt, a producer on the film, was among the stars for the long-awaited red carpet premiere.

Australian director Andrew Dominik spent 11 years trying to get the film made, and has credited the MeToo movement with finally generating interest in the story – though he reportedly fought long and hard with Netflix over the film’s three-hour running time and graphic scenes.

The project only “came alive” when Armas came on board, he said, after he spotted her in a small film called Knock Knock.

“I knew it was her as soon as I saw her on TV, it’s a little like love at first sight,” he said in Venice.

Armas worked for months with a vocal coach and, despite online criticism of her Cuban accent when the trailer was released, it was barely noticeable in the finished film.

Adrien Brody, who plays husband and playwright Arthur Miller, said he was “transported” by Armas’s performance.

“On the first day of filming, I went home with this sense of awe that I had the privilege of actually working with Marilyn Monroe,” he said at the press conference.

The 11-day Venice Film Festival draws to a close with its awards night on Saturday.

As with Blonde, while critics have been divided on many films, it has been a stellar year for individual performances. There was a huge standing ovation for Brendan Fraser, who made a comeback from the Hollywood wilderness as a 600-pound (250-kilo) English professor in The Whale, sparking talk of Oscar nominations and a “Brendanaissance”.

Cate Blanchett is also an awards frontrunner for her complex role as a classical music conductor in Tar, which takes a nuanced look at cancel culture.

And Hugh Jackman’s performance as a father dealing with a depressed teenager in The Son has been labelled the best of his career.

Several films have tackled sexual identity, with Trace Lysette becoming the first trans actress to star in a competition film in Venice for Monica.

Other frontrunners for the top award, the Golden Lion, are oddball Irish drama The Banshees of Inisherin starring Colin Farrell, and Argentina 1985, the true story of the lawyers who prosecuted the military generals accused of the disappearance of tens of thousands of their citizens.