Danone doubles supply of some baby formula to U.S. By Reuters

Britain's M&S warns on outlook after profit jump By Reuters 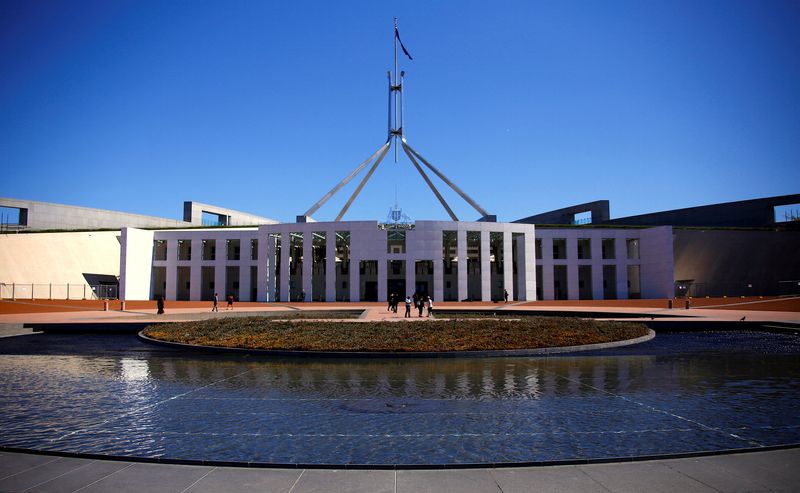 By Byron Kaye and Praveen Menon

SYDNEY (Reuters) – Australia’s mighty #MeToo wave is piling pressure on mining and political leaders who are preparing to face a reckoning over sexual harassment scandals stretching from the arid Outback to Parliament House.

Over the past 18 months, thousands of women have exposed a culture of bullying and abuse in mining, the country’s economic engine, as well as other workplaces, provoking public outrage and pledges of decisive action from politicians and executives.

Matters are now coming to a head.

The political response to revelations of workplace harassment is a white-hot issue in the run-up to a May 21 national election, with the ruling conservative coalition itself assailed by accusations of sexual impropriety and poor handling of an alleged rape case inside the parliament building in Canberra.

Meanwhile, mining companies are bracing for the publication next month of a report by Western Australia into sexual harassment at their operations in the state, one widely expected to zero in on their internal handling of complaints.

“Survivors of sexual misconduct should no longer live in fear, or shame, or silence,” said Elizabeth Broderick, a former Australian sex discrimination commissioner. “When one woman speaks, others will follow. I call on those who lead in the mining and resources sector to listen and learn from these stories and to step up with strong action.”

Reuters interviewed six women who said they had experienced sexual harassment or bullying at Australian mining sites in the past 18 months. Most of the alleged incidents were after Western Australia launched its highly publicised inquiry last August, putting the industry on notice to clean up its act.

Kylie-Jayne Schippers, a kitchen and maintenance worker at a remote mine owned by Adani Group was fired in December 2021, two days after lodging a complaint of sexual harassment and bullying that she said left her afraid to enter the site’s communal dining room, according to copies of the complaint and termination letter reviewed by Reuters.

Schippers filed the formal complaint to her employer, French services contractor Sodexo (EPA:), on Dec. 20 saying that an unknown person had circulated a note in the camp, falsely claiming to be from her, offering to grant a male engineer sexual favours at the site in exchange for favourable treatment.

On Dec. 22, she was fired for “failure to adhere to reasonable and lawful managerial instructions”, according to her termination letter from Sodexo. The letter said a review of her complaint concluded “no finding of bullying or harassment was substantiated”.

“I was scared, had anxiety through the roof, depression,” said Schippers, 48, adding the experience drove her to leave the industry. “They’ve done nothing except swept it under the carpet and got rid of me so they don’t have to deal with it.”

Sodexo said Schippers’ complaint “was urgently investigated before being resolved”, and that her “employment was later terminated for reasons unrelated to the grievance”.

Adani, which has renamed its Australian unit Bravus, said its staff had assisted Schippers during her experience and had made witness statements for Sodexo’s investigation. However, since the investigation was finalised, “this now a matter for the contractor and the employee”, it added.

Mining underpins the economy, with the industry accounting for 11% of national output and Western Australia providing more than half of the world’s iron ore. Adani’s Carmichael mine in Queensland is one of the world’s largest untapped coal reserves.

But the sector’s workforce of 150,000 is predominantly – five-sixths – male, a gender mix that’s little improved since its beginnings over a century ago.

Melissa McLellan, who was a maintenance supervisor for mining giant BHP Group (NYSE:) in Western Australia, said she filed a gender discrimination complaint in June 2021 after being passed over for increased responsibilities. Three days later, she was suspended from duties for a “fitness for work” assessment because she looked tired, a potential safety risk, according to documents and transcripts reviewed by Reuters.

BHP said McLellan’s allegations of bullying and harassment were investigated promptly and found to be “not substantiated”. A spokesperson added that the company was committed to creating a safe environment for people to speak up “and we regret that Ms McLellan did not have a positive experience with us”.

Most of the women who spoke to Reuters, including McLellan and Schippers, said their lawyers had filed, or were preparing to file, claims for compensation from the companies in question with the Fair Work Commission, a national workplace tribunal.

Such cases comprise just a sliver of the industry’s workforce. They nonetheless chime with a report published in February by leading miner Rio Tinto (NYSE:) into its own culture that detailed an environment of bullying, harassment and racism – abuse described by CEO Jakob Stausholm as “systemic”.

That review, conducted by former discrimination commissioner Broderick and informed by the experiences and views of more than 10,000 employees, found that nearly 30% of women had experienced sexual harassment at work, with 21 women reporting actual or attempted rape or sexual assault.

WOMEN VOTERS TO THE FORE

The country’s political response to sexual harassment and discrimination is firmly under the public microscope.

Political commentators say a national furore over workplace harassment and discrimination have been a major cause of a decline in support for Prime Minister Scott Morrison’s government among women, with opposition politicians and equality campaigners accusing the administration of shying away from necessary reforms.

In early 2021, female voters were evenly divided between the government and the opposition Labor party. By April this year, less than 40% of women planned to vote for Prime Minister Scott Morrison’s government, according to pollster https:// Roy Morgan.

The case of alleged rape in parliament, in which a former staffer has been charged with sexually assaulting a colleague in a ministerial office in March 2019, sparked nationwide protests. Morrison and the government subsequently issued a public apology for the treatment of women in Australia.

The former staffer denies the allegation and the case will be in court later this year.

Equality advocates want mining companies to be stripped of their powers to internally investigate complaints of bullying and sexual harassment, and for an independent oversight body to be established instead.

The federal government has acted on some recommendations from the Sex Discrimination Commissioner in 2020 to crack down on harassment in workplaces, but not all, and says existing laws should already cover many types of complaints.

A process for people to get a “stop sexual harassment” order – similar to a restraining order – from the Fair Work Commission against alleged offending parties in a workplace has proven ineffective since it began in November.

In the first three months of the program’s existence, 17 people applied for the orders but none were granted, the Commission told Reuters, the first time those figures have been disclosed publicly.

A spokesperson for the FWC declined to comment on why it hadn’t issued a single anti-sexual harassment order but noted that some complaints “may still be open or may have been finalised without an order being made … or withdrawn”.

University of Technology law professor Karen O’Connell, who advised the government commission that recommended the creation of the orders, said the orders were too narrow because they failed to intervene when a complainant had quit or when an accused harasser was moved elsewhere in the company.

“Those stop sexual harassment orders are still really important and they need to exist but they are not going to cover the vast majority of situations that people are in when they’re being sexually harassed,” said O’Connell, adding that laws putting a “positive duty” on companies to create a safe environment would be more effective.

“It’s ridiculous to require an individual to step up and take on all of that system themselves.”