Shah Rukh Khan’s son Aryan Khan, who recently shot for his first brand campaign, on Tuesday shared pictures from the brand’s photoshoot on social media. As he posted the photos on Instagram, he got a reaction from his parents, Gauri Khan and Shah Rukh Khan. While Gauri was in awe of her son, Shah Rukh wondered if Aryan is wearing his t-shirt in the photos.

Gauri couldn’t stop herself from singing praises of her son as she commented on his Instagram post, “My boy 😍… love love love.” But SRK was once again at his witty best while commenting on Aryan’s pictures. He wrote, “Looking really good!!…and as they say, that whatever is silent in the father….speaks in the son. By the way is that grey t-shirt mine!!!”

Shah Rukh’s comment left many on Instagram in splits. One of them replied on his comment saying, “@iamsrk khansaab the wittiest .” Another fan commented, “@iamsrk areyy sir.” A user also wrote, “T-shirt heist.” 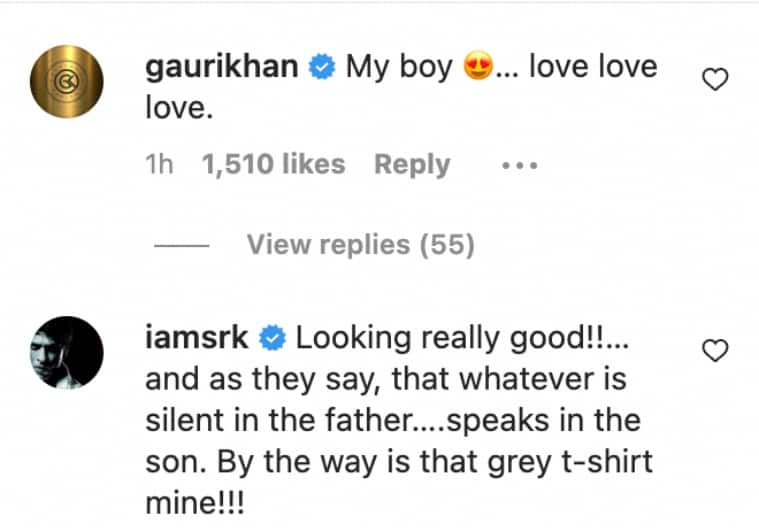 Not just his parents, Aryan Khan got compliments from many of his parents’ friends like Maheep Kapoor, Sanjay Kapoor, Seema Sajdeh, and Pooja Dadlani. Pooja commented on the photo, “Someone’s on 🔥🔥🔥.” Seema and Maheep left heart and fire emojis in the comments section. Sanjay wrote, “🙌 Too cool ❤️ @___aryan___.”

On the work front, Shah Rukh Khan recently co-produced Darlings with Alia Bhatt. The actor also has three films lined up for release next year — Pathaan, Jawaan and Dunki.